LSTC graduate Vance Blackfox, who is a citizen of the Cherokee Nation, writes this week’s post. Vance does not hold back in speaking his narrative and that of First Nation peoples who were subjected to brutalities that have been brushed under the rug and virtually unknown by citizens of United States of America. He is writing with a particular audience in mind, the ELCA, the denomination that he loves, and adores, yet one with whom he has a lover’s quarrel, and he speaks directly to the ELCA with righteous indignation. This is understandable, given the history of America’s interaction with the original people who inhabited the Americas and later with those who came as immigrants.

Vance, many of his Nation, as well as other First Nation peoples, have been re-traumatized the last several weeks because of what is happening to children and their parents who are crossing the border to enter this country.  It seems ironic that the descendants of those who First Nations people welcomed in 1492 are the ones who are turning away people who want to find refuge here as their ancestors who came voluntarily from Europe. It is very difficult for those whose ancestors were ill-treated by later generations of Europeans to witness what’s happening south of our border now – and I salute Vance for being brave enough to share his words.

As you read Vance’s thoughts, consider asking yourself, “What is it that I can discover about myself and my people?” Try to understand that the ELCA’s official Repudiation of the Doctrine of Discovery,  neither takes away or deals with the trans-generational havoc that continues to negatively impacts most First Nation peoples on reservations across the United States and Canada. The descendants of those who walked the Trail of Tears, especially those in the Midwest where many Lutherans live, have never been properly compensated for the misguided systematic discrimination of our government.

So, I ask you to listen carefully and be aware of the way your mind and body react while reading.

I ask you to receive what Blackfox has written as an act of love towards those who share his love for the ELCA, as well as the entire church of the Triune God.

When thinking about all of the tactics that the federal government has used to eliminate the identities, if not the actual lives and existence, of Native peoples, one stands out as particularly cruel and inhumane.  It is best known as the Indian Boarding School Era, yet there are so many people in the United States of America who are totally unaware that such schools existed, even though the “era” lasted for nearly 100 years.

I would like to be able to say to you, “Oh it’s not your fault that you don’t know about these boarding schools.  It’s just another example of our educational system failing to teach anything about the Indigenous people in the Americas.  I sure wish that would change and that schools and teachers would do better.”  I would like to be able to say that, but there are deep seated reasons why we don’t learn about anything – usually – in any of our education institutions besides Sacajawea, the Trail of Tears, and the “hostile Indians” along the black and green screened Oregon Trail.

So, what should you know about Indian boarding schools and the Indian Boarding School Era?  I would argue that you should know everything you could possibly know.  I will share some information here, and I think it will become clear to you why it’s important for you to be in the know.  Or at least I pray so.

The board school era did indeed last for over 100 years, 1860s – 1960s+.  The first question becomes, how can such a policy of the federal government exist for so long in the United States and so few United States citizens know so little – if anything – about?  This could be a rhetorical question, but it’s not.

The boarding school era is, as I mentioned, another tactic of the United States federal government to eliminate, figuratively and literally, Native people from ourselves and our lands.  The desire and need for European invaders to so do was greatly encouraged by the “Doctrine of Discovery.”  It gave invaders the permission and “right” to eliminate us, in the name of God, for the sake of God’s church and manifest destiny.  While the Doctrine of Discovery was first a papal bull, it became a part the DNA of each invader and settler, Catholic and protestant Christians alike.  In recent years, some protestant denominations have repudiated the doctrine, but have done so little toward repudiation in comparison to what has been done to Indigenous people for the last 500 years.

The boarding school tactic was indeed created by the federal government, but Christians and their churches supported the tactic whole heartedly. In fact, it was in 1868 when “Grant’s Peace Policy” was put in place that mandated the replacement of corrupt Indian Agents (white men who managed Indian people, reservations, and their affairs) with Christian missionaries.

There were more than 350 government-funded church-run Indian boarding schools in the United States, including Alaska.  Indian children, of all ages, were forcibly taken from their parents or abducted and sent hundreds, if not thousands, of miles away from their families, villages, and tribes.  This was so the children could not run away and make their way back home or so that the parents or families couldn’t attempt to come and take the child back.

Upon arrival, the child was lined up with other children to be washed, their hair was cut, they were given uniforms, and were instructed not to speak their own language or they would be punished.  What other language were they to communicate with if they didn’t speak English?  So, punished they were, often, and usually severely.

Such practices were only the beginning of a list of practices to accomplish the task of “Kill the Indian and save the man.”  This saying, reportedly coined by Captain Richard Pratt, founder of the Carlisle Indian Industrial School, in Carlisle, Pennsylvania, became the motto for the boarding school era.  Another quote that has lived on beyond the school, heard first by children at Carlisle, is “Let all that is Indian within you die.”

The schools were set up to teach basic elementary subjects like reading, writing and arithmetic, but were far more focused on teaching the children a trade that was more “fitting” for them – as if the children were incapable of learning anything but to become farmers or housekeepers.  Some of the schools did do better than others at caring for the children and creating masters in a trade.

It seems so odd to attempt to write about it all, so suffice it to say that the children, both girls and boys by both men and women, were molested, raped, chained, ridiculed, and severely punished, so badly so that children did died.  Each school had a cemetery with marked graves.

One hundred years of family separation.  One hundred years of trauma, to be passed from generation to generation.  By 1930, approximately 70% of our people had been to boarding school.  Some do say that their experiences at their particular school was better than staying at home.  At some boarding schools, they did learn a trade, and they did get three meals per day, and new uniforms or clothes, which they would not have gotten back on the reservation.  Family separation for us was much of the time going from one prison to another.

Have you read enough?

This information about the Indian Boarding School Era that I offer here is just the surface.  The stealing away of our culture, spirits, religious life, and the indoctrination into a strange, cruel, new world on our own lands is very real despite what you didn’t learn in Sunday school or 5th grade social studies.  You must now take the time to research more, learn more, be less complicit if that’s possible.  And remember that history does indeed repeat itself, especially if the masses don’t know or care to know what happened in own their history to begin with.

Family separation is nothing new.  It is continuing to happen to brown people, Indian people along the Rio Bravo and elsewhere along that imaginary line.  It continues to happen, and they still don’t want you to know.

And yet, there is so much more that you need to know.  But don’t take my word for it, I mean am only an Indian with a boarding school heritage and a public school education after all. 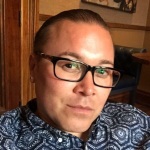 Vance Blackfox is a citizen of the Cherokee Nation, and is a long-time advocate for Native youth and their educational success. He is also a trained theologian, having completed a master’s degree and begun Ph.D. level coursework at the Lutheran School of Theology at Chicago, having focused his studies on Native Theology, the works of Vine Deloria, Jr. and Lutheran History in Native communities. He has worked intimately with the Evangelical Lutheran Church in America, serving as development editor and publisher of resources, as well as event producer. He is also the creator of the Vine Deloria, Jr. Symposium at the Lutheran School of Theology at Chicago. He has also completed extensive graduate studies in Leadership and Ethics; and earned a bachelor’s degree in Communications and Ethnic/Cultural Studies from Texas Lutheran University.

He has most recently served as the Executive Director of the Haskell Foundation at Haskell Indian Nations University, working to promote the gifts of the University and to gather financial support from alumni, tribal nations and corporate investors. Previous his time at Haskell, he served as the Executive Director of the Oaks Indian Mission, a residential-care facility for Native children located in heart of the Cherokee Nation, which is also the oldest, continuously operating education and social service organization with, for and by Indian people in the United States.