Last fall, our first trans author, River Needham, presented “We Talk. We Listen.” with a marvelous tutorial on the foundational concepts and terms of trans identity. A little more than a year later, River now gives us a tripartite reflection – on the 2016 election, on Trans Day of Remembrance, and Jesus’ reliable embrace in our lives and our pain. As a seminarian and an academic, River lives and breathes and studies intersectionality and their current reflection is a tour de force of complex identity, compassion, and intellectual probity. Read, comment, and share.

This past Sunday, we commemorated a special day in the church year: Next week, we start the year over again and can celebrate the anticipated coming of Christ with Advent again. We remembered the end of the church year; We celebrated the coming realm of God and the characteristics of God’s realm that Jesus taught us. We also commemorated Transgender Day of Remembrance.

The past few weeks have looked like and reminded me of the times of Jesus. Just about two weeks ago, our country went through an election, for president.  People on all sides of our national discourse had placed their hopes and their dreams in their ideal candidate.

When Jesus was born, the empire had just called a census. When the time came for the religious rituals of being born, a man at the temple prophesied over Jesus and said: “God has raised up a mighty savior for us, and that we would be saved from our enemies and from the hand of all who hate us.”[1]

How similar it feels: Politicians had the hopes and dreams that people had for Jesus placed upon them. They would be a savior from the status quo or the ramp of progress into the future.

Today, we read the result of Jesus’ unannounced run for political office in the Judean province of the Empire of Rome.  “When they reached the place called The Skull, they crucified him.” Jesus resisted the political system, by preaching God’s realm is coming soon – and the people called out “Crucify Him,” the government honored their wishes, and today we remember that Jesus was crucified – and more than being crucified, Jesus showed us the realm of God brought to earth.

In the US election, there was hope for a Green new deal, a libertarian return to individual sovereignty. Others were hoping to find a way to make our country great or to celebrate the greatness we already have in the USA.  Once we got the vote counts, we realized that something was missing, and I dare say that no one was particularly happy – no matter where you stood coming into the election.   The supporters, voters, and citizens, were each terrified, heartbroken, and reeling, by the election results, the realization that the election cycle deeply divided our country, and that none of our political saviors could save our hopes and our dreams for our country and our future.

Transgender day of Remembrance also falls on the 20th of November, this year.  Some of us gathered to read and to hear the names of two hundred, forty transgender people, each one beloved by God, who were killed by clients, lovers, parents, cousins and strangers in the name of honor, fear, and emotions that are incomprehensible.

We gathered to remember the 55 beloveds of God, who in their violent deaths lost their name.

We remembered those killed by their own hands, because of this cruel world not yet ready for their gifts. Society sacrificed each of these transgender people to our god-like ideals of conformity and obedience.

Jesus shows us a different way.

The realm of God.

Jesus comes to us in our fear and grief and sits with us.

As we read the names of transgender people, a few stood out to me and helped a few of my dreams (Well, more likely fantasies) die.

One of these dreams that had to die was that Chicago was universally a safe place for people who, like me, defy the normative narratives of society.  On the 11th of September of this year, T. T. Saffore was killed just a few short miles from here.  She died after her attacker stabbed her over 100 times.

Another one of these dreams was that the demographic information for those killed doesn’t match up with mine all that well, and maybe I would be safe.  Then, this year 24-year-old Kayden Clarke was shot and killed by police responding to his call for help, because he was suicidal.

As we gathered for Transgender Day of Remembrance, God came and sat with us in our grief.  As we read the names, lit candles, and shed tears, God was here, reminding us of their presence, grace, and love.

Later in Luke’s crucifixion narrative, we see Jesus interacting with criminals – who acknowledge that their crucifixions were legitimate while resisting the legitimacy of Jesus’ death sentence.  When they beg for mercy, Jesus reminds the man on the cross next to him, that the coming realm of God would include him.  Jesus, as he was in deep pain, responded to the cries of the fearful and hurting.

Jesus was a boundary breaker

Jesus was living in the realm of God, where we are all siblings together,

the realm of God where we are our kindred’s keeper,

the realm of God where we come together and sit with each other in our grief.

In our national and local political environment, our pain began to grow so apparent about two weeks ago, and that grief has only increased over that time. I believe that Jesus’ grieves too, over a country divided against itself. He grieves over those beloved children of God who feel the need to dehumanize and to kill other of God’s beloved.

She grieves over those treated differently because of the color of their skin, the gender of their heart, the people they love.

Here we see that just as Jesus came to earth and was born during a tumultuous political time, we can rest in the assurance that Jesus has been with every one of us as we have mourned the election results. Jesus was with us as we remembered Kayden, T.T., and the other 293 of our transgender siblings whom we remember this year.

In the Icon on the screen, which uses dated language, the artist takes the violent, death of Rita Hester in Allston, Massachusetts on November 28, 1998, and compares it to the crucifixion of Jesus. The vigils and memorials following her death gave birth to what we call today Transgender Day of Remembrance.

Today, while Jesus sits with us in a cosmic, spiritual way, the realm of Christ reminds us that we can embody the values of Jesus by sitting with each other in our grief. We can gather around the things that cause our hurt, find and enact our solutions, and become a community that gathers together, grieves together, and then gets it done and fixed, together.
[1] Luke 1:69,71. 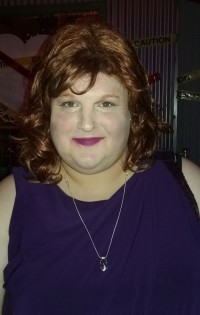 River Needham  studies at the Lutheran School of Theology at Chicago. River focuses their time and work on fostering trans/gender liberation and emotional wellness within local congregations. River uses pronouns like they/them/theirs/themselves.