As our conversation on gender continues, we’re going to make a marvelous twist in the road with our next author, Andrew Nelson. From the halls of the Lutheran School of Theology at Chicago to Holden Village to his call in New York state, Andrew is extravagant with his energy, sincerity, and enormous heart. Since coming out as trans a little over one year ago – barely one year into his first call – Andrew has spoken openly and playfully about everything that he’s been going through. Thankfully, Rev. Nelson is now, generously and joyously,  sharing some of those thoughts with us. Gender is a thing, people, so take a peek at what Pastor Andrew has to say about it and – of course – read, comment, and share!
Rev. Dr. Linda E. Thomas – Professor of Theology and Anthropology, Chair of the LSTC’s Diversity Committee, Editor – “We Talk. We Listen.” 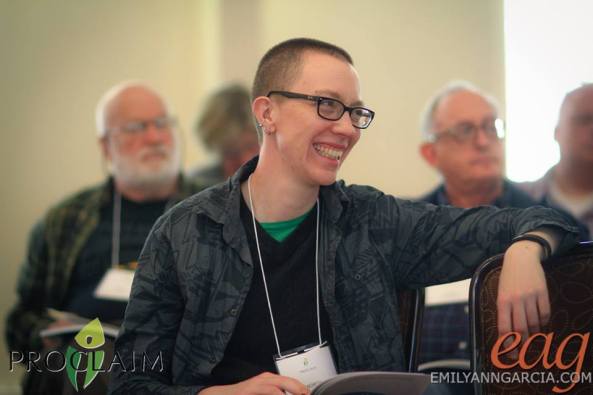 A transmasculine person writing on why gender matters…
There’s a sentence, isn’t it?
Are we ready for a conversation about genders outside the binary, genders along the spectrum, genders that are fluid, genders for which we don’t have words in English?
To put myself in a gender category is easier some days than others. Growing up with a female body (that’s called my sex, different from my gender) there were expectations for my behavior which were only partially enforced. Grandma called me ‘young lady’ when I needed to calm down, my father adjusted my posture at the piano, and of course I had to go to prom in a dress. But when it came to climbing trees and playing music or sports, I was just a kid, and being a boy or girl didn’t come into it.
When I came out as Transgender about a year and a half ago, some of my friends who have known me awhile responded by nodding and telling me I make more sense male than I do female. While this was a great affirmation to hear, it does make me wonder what in the world we mean when we perceive people as either male or female, how we behave when we meet somebody who is androgynous, and why it matters so much.

Everyone inhabits a multitude of spaces: age, gender, sexuality, class, race, mental health, physical ability, education, politics, family systems, culture, Star Trek or Star Wars… We are none of us only one thing, yet male/female seems to be one of the first things we give as primary identity. It’s already been noted that when a baby is born or expected one of the first ways we decide what gifts to get and what dreams to start dreaming is to unveil the birth sex (which we call gender, but these are not actually the same thing).
Gender plays into our power structures, culturally who is allowed to get how angry about what, who is allowed to grieve in what way, who is expected to take care of the household or be the breadwinner. Even when a heterosexual couple tries to live in an equal partnership, the pay gap and surrounding culture don’t support equality within marriage as much as reinforce unhealthy pressures for culturally gendered roles. We’re getting a little better, changing tables are gradually showing up in men’s restrooms so dad can change a diaper, Target recently stopped specific gender marketing toys for kids (though toy guns have an aisle that’s blue and dolls have an aisle that’s pink – and don’t even get me started on “Lego Friends”), and more hopeful stories are being told about folks who don’t buy into to the binary – but it’s slow going since so much of our expectations are internalized past the point of noticing them.
Gender is the water we swim in.

So why do we still hold to gender? What does it matter that ‘real women have curves’ or ‘real men love Jesus’? What are ‘real’ men and women, and why do we perpetuate that conversation as though we need to prove our own validity as human people?
Can’t a ‘real’ person just be a person?
I remember an old movie I used to watch as a kid included the song “I enjoy being a girl,” which, coming from a family where sexuality was taboo and gender got all conflated with attractions and purity, was not something we ever really talked about. But then came the Disney movie Mulan and the song “I’ll make a man out of you” was both exciting because I connected with it, and problematic because it reinforced a very particular kind of masculinity. I mean, my father darns his socks and speaks quietly, but he’s no less a man for his gentle behavior.

So how do I know how to behave to convince the people around me of who I am as a transmasculine person?
Does it even matter that they see my gender?
How do I have to hold myself in public to hear ‘sir’ instead of ‘ma’am’ (neither of which seems like I’m old enough for those labels, which speaks to cultural ageism)? (How) do I need to adjust my interactions with women and other men so as not to make anybody uncomfortable by my loud humor and big hugs, which could be received differently depending on if I’m wearing a suit or a dress? Navigating gendered space, like public bathrooms, is not something we should have to be afraid of. Yet because our brains learn categories as a way to make sense of the world around us, we need to know some basics, some boundaries, some common sense for keeping one another safe and providing for community flourishing the best we can.
Gender matters, in that we can fall back on it for generalities, for stories, for illustrations of ways of being, but it also doesn’t matter, in that there are so many ways to be male or female or both or neither, and every situation and relationship calls out different nuances, different varieties of strengths and weaknesses, as we support and connect with one another. Gender can be a game instead of a power play, it can be fun instead of rigid, but far too often machismo and homophobia relegate masculinity and femininity to small, tight spaces where there is no room to breathe or figure out who we actually are. We do not need to prove ourselves as ‘real’ men or women to celebrate and discover who we are individually and as part of God’s Beloved Community.

I am a transmasculine person who looks forward to playing with gender expectations, to make the space around me safer for those who don’t fit the binary, to open up conversations about getting to know one another beyond the ‘types’ of our male/female expectations.
I am a transgender man because it is the most honest way I have to present myself to the world around me.
That’s what gender is about, how we relate to and through our presentation of self and our interactions with others, how we explore and share the selves God has created us to be, how we reflect the Image of a God who is so much bigger than our labels.

Andrew Tobias Joy Nelson is a 2012 graduate of LSTC, serving his first half-time call in Chatham, NY. He’s trying to be as visible as possible about being Trans for the sake of those for whom visibility is impossible because it would put their lives and livelihoods at risk. Andrew plays french horn and is always reading four or five books at a time, though he can’t pick a favorite between Star Wars and Star Trek because the musical scores are too good. He writes in tribute to his mother, who responded to his public gender transition with the assurance that she “always knew [she] was carrying a boy.”