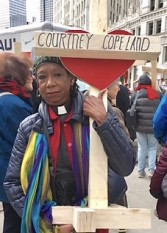 These are hard, strange days in the United States. Reading the news, it isn’t hard to think of Jesus’ warning in Mark 13 – to keep awake as thing start to unravel. But in dark times like this, there is still good news to be preached and the Rev. Dr. Yolanda Denson Byers delivers. Read, comment, and share!

Lord, let my heart be good soil. And let your love reign supreme. And may the words of my mouth, and the meditations of each heart under the sound of my voice be found acceptable in your sight. For you are our Lord, our Rock, our Redeemer… Amen.

If you’re anything like me, you watched what unfolded in Charlottesville, Virginia yesterday with the utmost horror. The America that I, and people who look like me always knew existed, roared onto your television sets yesterday. Unhooded, uncovered, unashamed, and bold as it could be.

There’s a few of you in this room I can tell didn’t see your televisions yesterday because you don’t know what happened. Charlottesville, Virginia, is the hometown of some of my family, so I am VERY impacted by what happened there yesterday.

This narrative began to unfold on Friday night, when two counter-protest groups arrived in Charlottesville, Virginia. One group arrived with members of the KKK, Neo-Nazis, Skin Heads, and other white supremacists who were there shouting slogans like, “White lives matter!” and “Blood and Soil!” (which is a Nazi chant) and “We will not be replaced!”

And then another group arrived Friday night, saying things like, “Racism is wrong!,” and “Black lives matter!,” and “God wants better and more than this for our country!” And on Friday the group of anti-racists gathered in a church, and there were many of our ELCA brothers and sisters there. I don’t know if you were watching that, but there were many ELCA pastors who were there, along with other pastors from denominations all across the United States – who banded together inside of the church, to pray that God would rescue our country from the sin and the stain of racism.

As they sang, and as they prayed, and as they called, “Lord, help me!,” like Peter, the church was surrounded by white supremacists with torches. And they were unable and un-allowed to exit that church. It was a scary moment – how many of you saw the picture of a little African American girl, swept under the arms of a white bishop *(see image caption below) – SHAKING – because she was so terrified that she was barricaded in that church, and she thought that was going to be her last day on the Earth. Who saw that picture…?

I encourage you – go home and look it up. If you guys had had a screen – I was gonna show you everything!

But there’s a little African American child, in the arms of a white bishop, and he’s holding her against his chest, y’all. As this little girl shakes in fear – as the church is surrounded — they’re barricaded and can’t get out.

Ultimately, somehow, by the Grace of God, the police extracted them – but not without great violence. There were actually University of Virginia students – how many of you have college kids in your families? Yes, there were some heroic students, who faced down the mob, and for their efforts were beaten bloody at the base of the Lee* statue which is at the heart of this argument (*adendum – the statue was actually of Thomas Jefferson).

The next day, white racists had called for a protest march, and THOUSANDS of militiamen, armed with assault rifles and guns, and their supporters, arrived in Virginia. And what unfolded on yesterday was something we have never seen in recent memory on the televisions of the United States of America.

There was blood-shed, three people died, nineteen people were injured in a vehicular terrorist attack, and let’s call it what it was – terrorists attacks are not only perpetrated by people with brown and black skin, ya’ll!

A woman named, Heather Heyer, was killed in this vehicular terrorist attack. A white racist drove his car into a crowd of protestors – have you seen the pictures? Raise your hand if you have!  – Bodies LITERALLY up in the air; upside down!

“What are you doing here, Elijah?!”

While we the church, have been hidden away in a cave, failing to teach even our own children, (pointing outside of the walls of the church) that’s what our country has come to!

Yet what does that mean?

What does it mean?

To be quite honest, it doesn’t mean much.

If we, in church, don’t have the moral courage to stand up at a time like this, our faith won’t mean much.

I saw on Facebook, someone asked, if you ever wondered what you would do during the Holocaust, during the Civil War, during moments like these – you now know. You would do whatever you’re doing right now.

If you ever wondered how you would stand up and be counted in a moment when destiny has seized us, whatever you do in this moment right here, is what you would do. And so in churches all over America, we have to say something that’s True.

And what is True?

This morning I woke up so mad at Pastor Tim, I didn’t know what to do! (*laughter*) Because this would have been a better sermon from a white man.

We’ve been sayin’ it! We need YOU to say it. We need our white brothers and sisters in Christ to SAY IT!

Did you see the young men on the television holding the torches with crosses around their necks?

His name was Dylann. He grew up in OUR church.

Martin Luther taught us that sermons are not supposed to be feel-good messages, y’all. He said preach LAW, and then preach GOSPEL. Diagnosis the problem and then give the solution – which is ALWAYS King Jesus! Tell the truth! It’s always in order.

I am so sad for my white pastoral colleagues who didn’t find the courage today to tell The Truth. (*holding hands up; palm out*) In my flesh, I embody the wounds of racism today.

I got my doctorate at Luther Seminary, in Congregational Mission and Leadership – it’s a fancy word for Evangelism, but Lutherans are afraid of evangelism, so… (*laughter*).

And if we keep this Jesus to ourselves – Shame on us!

And if we don’t tell everybody that God loves them, then shame on us!

And if we don’t confront racism wherever we find it, even if it’s at our own kitchen tables, then we’re complicit in this sin!

And so from today, I can’t do anything about anybody that wasn’t here today (Amen!).

But for those of us who were in this room, you have heard the call to action. You don’t have to go somewhere far away. You don’t have to get on a plane and go save somebody, in Africa. Stay at home, at your own table, and change your little piece of the world for Jesus.

The storm is raging; yes it is!

There are enemies outside of the cave; yes there are!

This is a scary time in America; yes, it is!

Jesus is the light of the world.

Take your fingers and mark yourselves with the sign of the cross (on the forehead). This is the calling of our baptisms. This is why we are called and sent and gathered every Sunday – not to hear feel-good messages — but to hear Law met with Gospel, and the to be sent out to be God’s Love for the world. 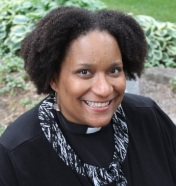 The Reverend Doctor Yolanda Denson-Byers was born and raised in St. Louis, MO. She was educated at Wesleyan University, Harvard University, and Luther Seminary. She is currently in her twenty-first year of ministry and serves, in extraordinary call, within the Southwest Minnesota Synod of the ELCA. She is a hospice chaplain and an itinerant preacher. She is a proud wife, mother, daughter, sister and friend. But most importantly, she is a child of the Most High God.

6 thoughts on “What are You Doing Here? – Rev. Dr. Yolanda Denson Byers”